The bougainvillea tree, which has become the symbol of Bodrum in our country, is the most used plant in landscaping and provides an eye-catching image. It climbs by wrapping around the place it is in and creates a pink visual feast.

Especially when it is wrapped around a white wall or the edges of the building, it creates an incredible beauty due to the color contrast. There are many varieties of this type of bougainvillea, which can reach up to 5 meters in length. All the flowers are eye-catching and admirable.

The bougainvillea plant, most of which is not resistant to cold, is also a plant that is not very good with extreme heat.

Jeanne Baret, an assistant herbalist, came across this plant in the hills near the Rio de Janeiro region during a three-year voyage in 1760 and carried it to the ship.

This woman, who has extensive knowledge of botany, managed to enter this ship by disguising herself as a man. Because it was forbidden to take women on ships at that time, it was rejected. This herbalist, girlfriend of Philibert Commerson, is also in the position of being the first woman to tour the world disguised as a man.

Meaning of the Name Bougainvillea

At the end of the 2nd year of the ship’s voyage, she was anchored on an island, where the true identity of the woman was revealed. Commerson, who wants to save his lover in the face of this difficult situation, makes a promise to the officer of the ship.

He states that they will give the officer’s name to this plant they discovered and that it will live botanically forever. At this point, the bougainvillea is also very meaningful as it bears the name of Louis Antoine de Bougainville, the first French navigator to circumnavigate the world completely.

What Features Does the Bougainvillea Flower Have?
The homeland of the bougainvillea flower is Brazil and is a plant belonging to the Nyctaginaceae family. It has been determined by botanists that there are 18 species in the world. The bougainvillea can reach up to 7 meters in length and has stinging and hard spines on its trunk and branches. It grows fast and clings to where it is found.

The flowering, which generally starts in the spring, does not shed its flowers even until the end of winter, if it is grown in a region with a warm winter. However, it can be kept indoors if it grows in an area with cold winters. Bougainvillea is known for its fondness for the sun and humidity. The bougainvillea plant, which can be easily grown both in pots and in the garden, has a very pleasant appearance.

Things to Consider When Growing Bougainvillea Plant
The bougainvillea plant thrives best in well-drained, manure-reinforced, red soils containing clay or sand. The pH level of the soil where it is grown should be between 6-7 and neutral. Thus, it grows quickly and blooms a lot.

Growing Bougainvillea in Pots
If the bougainvillea plant is to be grown in a pot and its flowers and leaves are shedding, it should be immediately transferred to a larger pot. However, the roots should not be damaged while performing the change. Since bougainvillea is affected by winter frost, it should be wrapped with plant-protecting covers and protected from cold. Flowering decreases when watered abundantly. The bougainvillea plant, which is adequately irrigated according to the dryness of the soil, grows healthily in this way.

During the flowering period, especially abundant watering should be avoided. The bougainvillea plant, which is reproduced by the cutting method, is a plant that frequently sheds its old leaves and renews itself. Care should be taken when planting, because it has spines on its body that can sink into the hands.

Leaf Characteristics of Bougainvillea Plant
It is a bright green, oval-looking plant with pointed leaves. It has pointed and oval brackets that are actually showy. These are the leaves of the bougainvillea, not the flowers. At the bottom of the brackets, which can be red, yellow, white, orange, there are tiny, yellow flowers that are self-evident and have no odor.

Reproduction and Benefits of Bougainvillea Flower
The bougainvillea flower, which is a plant that gives the impression of a visual feast to the place where it is grown, is a plant that fascinates those who see it, is reproduced by the cutting method.

February and March are suitable times for the vaccination period. Cuttings taken from the woody branches of the bougainvillea plant with 4 eyes should be protected at 28 degrees during the reproduction process. Rooting of cuttings can take approximately 1 and a half months. 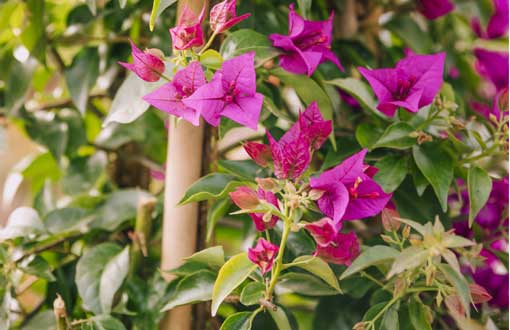 Purple and Red Types of Bougainvillea

There are two types of bougainvillea plant, which has a wonderful appearance. Both have the feature of being preferred at home or outdoors. The one with purple flowers blooms in the spring and the flowers still stand on it even in the fall. It has a striking and different purple hue.

The bougainvillea, which is sensitive to frost, has nothing to do with cold weather. But it is resistant to high temperature and is also known as light plant. Purple bougainvillea, which can reach up to 6 meters in height, is preferred by many people for covering balconies. The other species also has leaves that have a brick-red color.

The Place and Importance of the Bougainvillea Plant in the Landscape
Bougainvillea plants wrap around like ivy. Thus, it is used to close the walls and to obtain a pleasant appearance. The bougainvillea hanging from the balconies or terraces of the houses or from the roofs creates an incredible view.

The bougainvillea flower, which is very common in temperate touristic areas, is also the focus of attention by tourists. It can also be used as a hedge plant by shearing and shaping. It creates an eye-catching beauty on buildings or walls made of stone, especially in blue or white.

Tips for Watering and Pruning Bougainvillea Plant
Bougainvillea soil may dry out in very hot weather. In such cases, not neglecting water is important for the development of bougainvillea. However, watering before the soil becomes completely dry will not benefit the bougainvillea.

If the soil of the bougainvillea is nutritionally deficient, it is useful to supplement with plant nutrients once in every four irrigation processes. There is no need for plant food or fertilizer for the bougainvillea plant grown in the garden.

No comments to show.